“Are you sure you and Michael aren’t really just good friends?” my mother has asked me–more than once. I assure her that is not the case, but I can see why she thinks this. Michael and I, unlike most couples I know, spend a lot of time apart from each other. I don’t just mean a night or a week-end–I mean weeks, months. Michael and I joke that though on paper we’ve been dating for a year-and-a-half, in reality it’s only been six weeks.

Why all the time apart? It’s not because one or both of us travel for work. It’s not because we are in a long-distance relationship (though it often appears that way), and it’s certainly not because we don’t like spending time with each other (well, I don’t think it is–maybe Michael thinks otherwise?!) The fact is that we both love to travel, often “on-a-whim”–which, to me, is taking off on a multiple-week trip with less than three months of planning time, sometimes less than a week. And sometimes the travels one of us wants to take are not of interest to the other, or not good timing for the other. So instead of deciding not to go, we go anyway. With the blessings of the other, of course.

Like the time I decided to go to Nicaragua. In three days. (Where, upon arrival, I learned my Spanish lessons were to take place in the same building as the chocolate museum!!)

And so it was that less than a week into our three-month visit to France last summer I took off for ten days to walk the Camino–by myself. Again. Michael had work to do but I was antsy–unsure what on earth I’d fill my three months with (silly thought, I know, but that’s a story for another day). What I did know was that I love walking the Camino. So I took off–honestly out of fear of the unknown, yet ironically into another unknown. I walked a route I’d never walked, beginning in a country I’d never before visited whose language I didn’t know. Apparently I thought that would be easier than trying to figure out if Michael and I were stable enough as a couple to live together for the first time. In a foreign country. For three months. 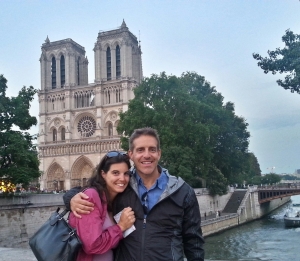 Two weeks after returning from France–where I discovered that I did indeed love living with Michael, and got the feeling he felt the same way–I left him again.

This time to go on my twice-yearly writing retreat. For two weeks. My writing is a key part of the story of how Michael and I met, so it’s no surprise that Michael didn’t object to my leaving for two weeks. Besides, before he met me, Michael says he was pretty much a hermit. So I figure he gets to reminisce a little when I’m gone. But hopefully I return before he decides he’d prefer that life to one with me!

Oh. And then there was that time I went to live on a goat farm on an island in France for a week. Without him.

Then there was this past winter, when we lived as if we were long-distance lovers. To my credit, I did tell Michael–numerous times–that I had no intention of wintering in Schroon Lake. Apparently he did. Some would compromise by giving in. I compromised by moving three hours south (as opposed to three states south).

We’re together sometimes. Like when I insisted we were having a live Christmas tree. And we’d cut it down ourselves. (Well, more accurately, which Michael would cut down himself while I watched.)

Up until this point, I had precipitated all of these separations. Michael had noticed this pattern. Thankfully, he had yet to take offense to it. And made me feel better about all of it by taking off himself in April. For California. Without a return ticket. Some would see this as a sign of impending doom. I saw it as typical of the life of a traveler–why limit yourself with a return ticket? 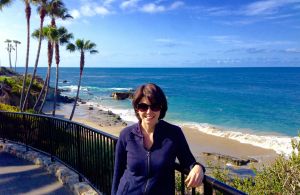 To my credit, at least when Michael takes off for a couple months, I go visit him:)

I could only visit him for one week due to my teaching schedule. He returns today. But in the meantime, it may appear that I’ve one-upped him.

I called him a few weeks ago to tell him that my dear friend Lois (yes, the same one in the earlier pic) finally took me up on my offer to walk the Camino with her if ever she wanted to go. And she wanted to go this September. “Oh–and she wants to do the entire 490 miles. And to walk only ten miles a day. Which means we’ll be gone for two months.”

Michael, of course, told me to go. I wrote him an e-mail the next day. “Two months is a long time to be away from you.” He wrote back, “. . . I know, but this is something you want to do. I say go for it. Life is way too short. You have my blessings.”

I forwarded that message to Lois. She wrote, “I’m in love.” 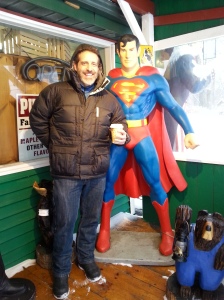 7 thoughts on “A Tale of Two Travelers”

Leave a Reply to Jenn B Cancel reply