“I’m stopping at the next shady spot to eat something,” I told Dad as we walked a dusty, packed dirt trail through vineyards and plowed wheat fields. Soon an olive grove came into view. I passed by the first few rows hoping to find a tree with a rock underneath it–was it too much to ask for shade as well as a seat? A second later my wish was answered. It wasn’t much of a rock, but it was better than sitting in the dirt–which was made more difficult on this Camino when I decided a hiking skirt would be part of my “beat-the-summer-heat-while-hiking” approach. 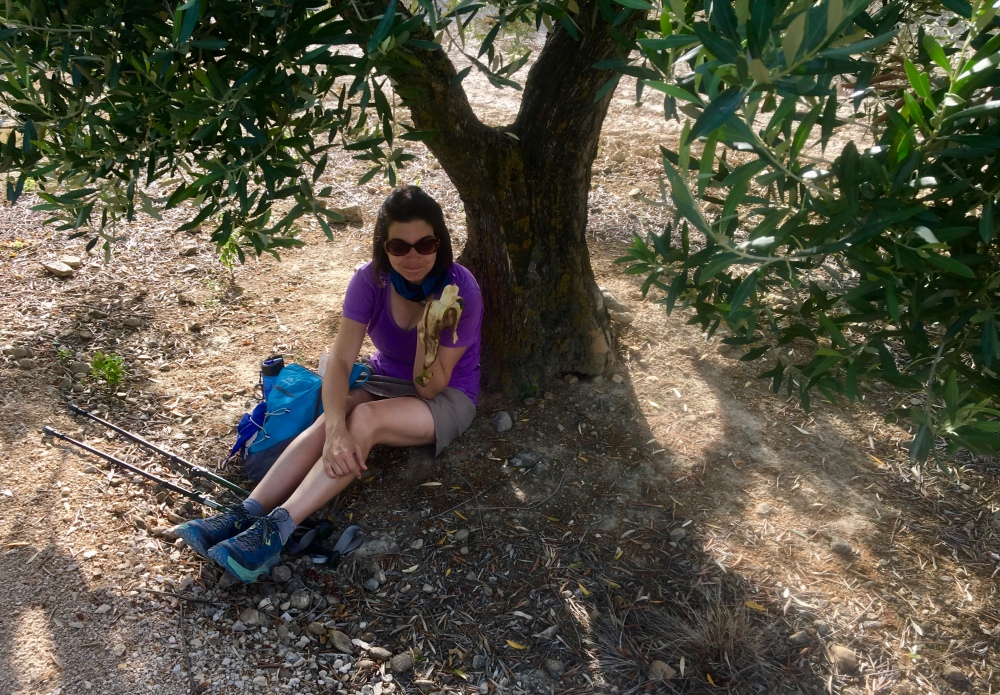 I very ungracefully took my seat and pulled a just-a-bit-bruised banana from my daypack. Dad stood next to me holding onto one of the tree branches as if he was standing in a subway car holding the metal rail. “If I get down there, I won’t be able to get back up,” he said. He’s certainly a man who knows himself, I thought. We were six miles into the fourth day of our week-long walk on Spain’s Camino de Santiago and Dad had decided yesterday that he would be better off hiking in his Keen sandals than his Merrell hiking sneakers. He decided socks were optional, but had taken this daughter’s advice and put both the socks and sneakers in his day pack in case he found out, six miles into our day for example, that he made a bad decision. The day before, he’d decided that he only needed one hiking pole, not two as I used. And he only needed it for the downhill portions of the trail. And he wasn’t going to try too hard to learn how to open the collapsible stick when he needed it. That’s what I was there for.

After finishing my banana, I pulled a package of trail mix out of my pack. Upon seeing this snack break wouldn’t be over anytime soon, my not-so-patient father decided this would be a great time to call his brother John who was currently vacationing in Ireland. It was 9:20 a.m.–too early to call anyone back in the eastern United States–but Ireland was only an hour earlier, so in the middle of the Spanish countryside, Dad rings up Uncle John. So much for enjoying the peacefulness of a quiet stretch of trail. . .

“Somebody called us about building a house,” Dad tells John. The two brothers build houses as a side gig–about one per year. “He saw the house we’re building and wanted to know if we’d build one for him. So I told him we could talk about it, but it’d have to be next week because one of the builders is in Ireland and the other is in Spain. He said, ‘Then you guys are probably too expensive for me.'” Dad laughed. I thought, Poor is the man who thinks it’s expensive to travel to Europe. Dad paid a grand total of $31 for his flight. Mine cost me the princely sum of $5.60. Travel-hacking, as it’s called, has gone mainstream and even my formerly-luddite father had gotten on board. Well, sort of. Dad had no idea he was even earning points until my brother Jeff, who works at a bank, told my Dad about the points he was accruing just by using his bank credit card.

Dad hangs up, once again exclaiming at the wonders of technology. “Look at that! I can stand here in the middle of Spain and call my brother in Ireland!”

“For everyone to hear!” I thought.

We got up and followed the yellow arrows across a farm road, past some pine trees and came upon a welcome site: an enterprising man had set up a table of drinks, fruit, and Camino trinkets for sale on one side of the trail. Four white plastic chairs sat in the shade on the other side.  And just beyond I saw dozens of cairns—single stones piled one atop another. Crouched just behind the chairs was a man, his dark hair in a ponytail,  a scowl on his face, looking down at his phone. He glanced up with a nod when I greeted him with, “Hola!”

Dad and I helped ourselves to cold drinks from the cooler and dropped our money onto the plate sitting on the table.  Though I’d just spent 20 minutes sitting, this new scene was an upgrade from my previous seat, so I said to a Dad, “Let’s hang out for a minute.” At seeing this, the man got up and lit a cigarette. “Habla Inglés?” I asked. “A little,” he muttered, still seeming a bit apprehensive about engaging with us. “Entiendo un poco español,” (I understand a little Spanish), I said,  hoping this would endear him to me a little more so that I could satisfy some of my curiosity about him and his little oasis here on the Camino.  I asked about the cairns, and he explained that he made them all himself. “Only using things from nature. Things from right here,“ he said.

He asked where we were from, and I realized I had cracked his shell. Josu was from Bilbao, a town not too far away on the Spanish coast. He used to work in economics, but says doing this is much less stressful. “But money gets you things. Like the ability to travel,” he said. So he may eventually cut his hair and go back to work for a little while. I noted the hammock behind him, the backpack hanging from a tree. “Do you stay here?” I asked. “Sometimes,” he said.

I took out my phone to videotape the scene. “Why do you live in North Carolina and your father lives in New York?“ he asked me while I was taping. “Ohhhh,” I said. “Don’t get us started. He doesn’t like that.” Dad laughed. I stopped recording and explained how I liked living in a place where winter ended before May. But this didn’t seem a sufficient enough answer standing beside my father.

As we finished our drinks, I asked the man if we could put his stamp in our Camino credentials. Pilgrims get a stamp every place they stay along the Camino, and various churches, bars, restaurants, and men selling things on the side of the trail all have them as well. As I got our credentials out of my bag, Dad asked Josu if he’d seen any tall, tattooed American men earlier. “Yes,” Josu said, apprehensively. “Are you friends with them?”

“We just met them last night and had dinner with them,” I explained as I pushed the stamp into the inkpad. Josu said that they weren’t very nice. “Didn’t even greet me. Just wanted the stamp.”

“Hmph,” I said. They were some of the most gregarious people I’d met on any Camino and I found this behavior unexpected. Dad said as much to Josu as I finished marking our credentials.  “Well, maybe because it was so early in the morning they weren’t like they usually are,” I tried to explain. Josu listened. “I try not to judge too much. . .” I offered cautiously, not wanting to force my ideas on this man’s experience. Josu and I talked about the Tau crosses he carves and sells, and I showed him the silver one I wore around my neck, explaining it was the symbol of the brothers who once resided at the Convento San Antón, where I volunteered on the Camino two years ago. “It’s also the symbol of the Franciscans,” he said, which I knew now, having seen people with them occasionally over the years and inquiring as to the meaning for them.

As Dad and I prepared to leave, Josu went over to a stand of necklaces–small scallop shells (the symbol of the Camino) hung from black cords. “Can you please do something for me?” he asked, as he pulled a few of them off the stand. “This morning, with your friends, I think I was the problem. When you see them, can you please tell them I’m sorry and give these to them?” We agreed and Dad tucked them away. Josu then gave us two for ourselves as well.

I didn’t think we’d see the brothers again. They walked over thirty kilometers each day (fifteen miles). Dad and I only averaged twelve miles, and the next day I had planned a “rest day” for us–just six miles. I wasn’t optimistic we’d be able to hold up our end of the deal.

But three days later we heard along the Camino grapevine that the brothers began in the same town we had that morning. One of them was injured, so they’d slowed down. And so it was that four hours into our last day on the Camino, sitting on a bench along the trail, we found Mitchell. He told us he was waiting for his brother Pace, who was somewhere behind us all on the trail. His brother Thor was staying back in Nájera due to a muscle injury. Dad and I pulled out the shells and told Mitchell all about our conversation with Josu. Mitchell was astonished and touched. 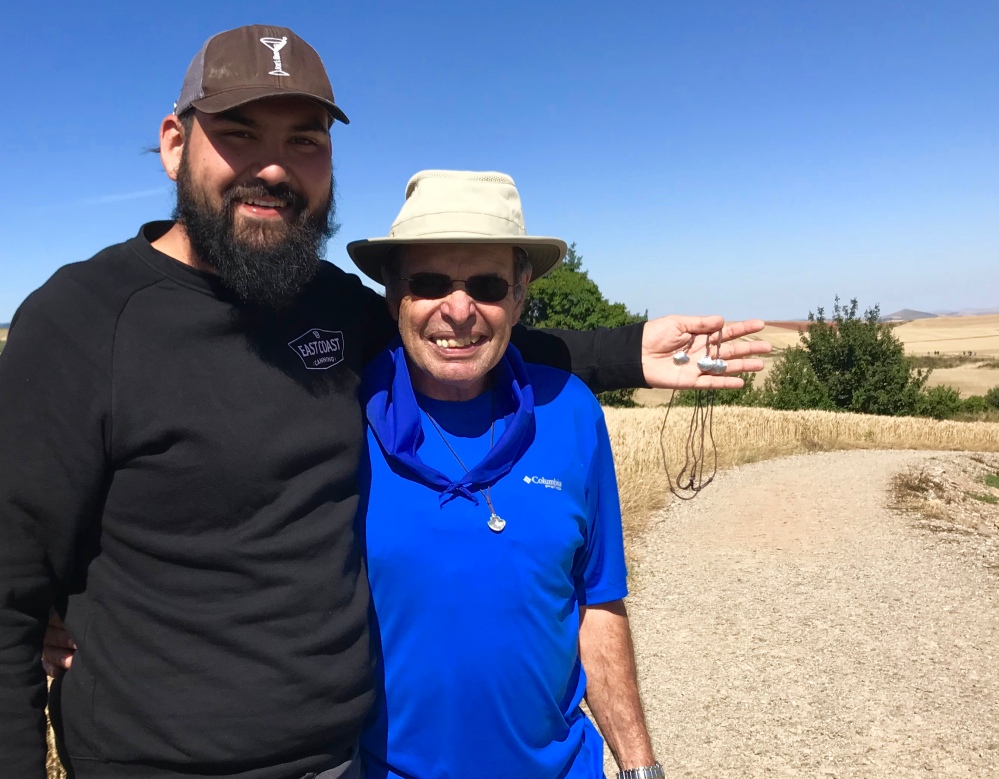 Later that night, Mitchell, Pace, and others we’d met along the way joined us for our final dinner together. Pace said, “You know, we’ve been on this trail for ten days or so, and meeting him (Josu) was the only bad experience I’ve had. He just wasn’t nice to us at all. But then a few days later, you guys show up with these (necklaces) and this story about how he wanted to make it better. . .”

As Dad and I rode in the taxi toward the Madrid airport he asked, “Do you always have experiences like this on the Camino? Meet all these interesting people? Have these things that happen–like with the necklaces? Or was this one different?”

“Happens every time,” I told him. “That’s why I keep coming back.”