Eight years ago, my parents bought a house in Schroon Lake, New York. It was a former boarding house — ideal when you have five children who like to visit with their friends, significant others, kids. It’s just a block from the lake. A block from the supermarket. A block from the tiny downtown (a coffeeshop, a couple restaurants, a wine bar). All in a quiet town of 1600 souls. The only downside to their purchase? The house was sold to them completely filled with someone else’s stuff.

To those of you not wanting to clean out your house in order to downsize and move to Florida, take this lesson from a woman in Schroon Lake: Sell your house. With everything in it.

I don’t just mean the house was “furnished.” Oh, no, that would be too easy. Every cabinet, drawer, and closet had stuff in it. The basement? Full of stuff. The plastic storage box on the side of house? Full. With plastic animals you can decorate the lawn with.

“She moved to Florida,” my mother said. “None of this stuff is really the style you would have in Florida.” Ah, my dear, empathetic mother.

And for my father? It was like a treasure hunt. Every time they went up there, I’d get calls about what else they came across. Boxes of Christmas decorations. A closet full of games.

Lucky for my parents, Schroon Lake has a town-wide garage sale every Labor Day weekend. People lug their stuff to the park on the lake, display their wares on tables, and hope someone else wants what they no longer do.

But for my parents, lugging all this stuff to the park — even though it was only a block away — was hardly going to make a dent. They didn’t have just a table or two worth of stuff. So what is a Gallo to do? Well, in the case of Lou Gallo, you head to your barn in Poughkeepsie, pull out your 20′ x 30′ red and white striped tent, throw it in your Honda Odyssey, drive up to Schroon Lake, put the tent up and your front lawn, and voila. Since their house is on the way to the town park, a few carefully placed signs (and a large red and white tent) made it easy to attract those out that day in search of treasures they didn’t know they needed.

Long story short: It took four years of Schroon Lake garage sales for them to clear the house of all the stuff they no longer wanted. I remember one year when more than one person showed up on our front lawn in Schroon Lake and said, “I always look forward to seeing what you guys have each year.” Yes, my parents were now “known” for their garage sales.

I wasn’t often able to help Mom and Dad clear out the house, but I was able to be present for a couple of those garage sales. Five tables displayed kitchen wares. Mom hung a string from the front porch post to the tree and draped bedspreads on it, hung curtains from it. Dad leaned some tires up against a tree. “Did you find those in the basement?” I asked him. “No. We brought those from home.” As in their main home in Poughkeepsie. Yes, for these garage sales, my parents imported stuff.

I recently heard that most Honda Odyssey’s are now sold to people over 60. Yeah — the one’s who no longer have kids  to tote around. They say it’s because the seats are so comfortable for driving. In the case of my parents, it doesn’t hurt that they can also hold a lot of stuff. Like the aforementioned tent. And tires.

Which brings me to this morning. When my parents texted a picture of the back of their Honda Odyssey. 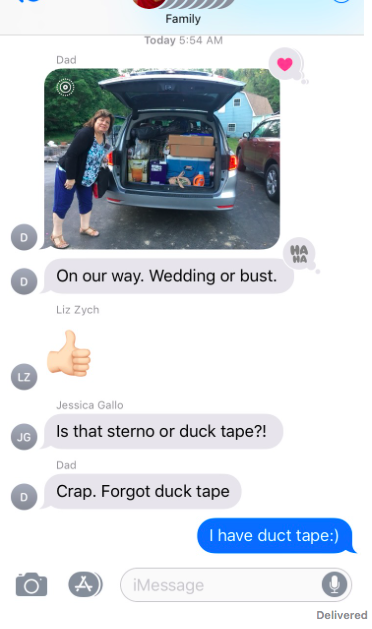 For those of you needing a translation:

And that whole “wedding or bust” thing that Dad wrote? That’s my wedding. You know, the one happening in four days. You see, Michael and I are having a BBQ at our house the day after the wedding. Michael was worried about the weather — specifically people roasting under the sun in our backyard. “We’ll have to rent a tent,” he said.

“We don’t have to rent one. My dad can just bring one down,” I said casually.

“Yeah. We had lots of parties at our house growing up. He used it all the time.”

“Red and white stripes. Here. I’ll show you a picture,” I said, opening up my laptop, thinking Michael might not want the circus look.

“And sun doesn’t come through that?” he asked.

“Seriously? That’s the point of a tent, hon.”

And so it is that I called Dad and added the tent to the long list of supplies he’s bringing down for the BBQ. “I’ve got two, ” he said. “I’ll bring both — just in case.” In addition to the chafing dishes, sternos, coolers, and drink dispensers. Lucky for us, despite four years of garages sales, Dad’s still got those.