On Saturday, July 1, I left the gîte Domaine de Sénos around 8:30 a.m. I wore my rain jacket, my pack sheltered from the predicted weather by its rain cover. My hands were warm inside lined gloves — I learned the day before that bare hands clasped to hiking sticks on a rainy 60 degree day got quite cold.

Ten minutes later, on the outskirts of Sénergues, the trail passed by a covered picnic area specifically built for pilgrims. After meditating there for a spell, I got going. It was only sprinkling, the ground was not too slippery, and I was moving along at a good clip when I suddenly realized I had a problem: I never paidthe gîte  owner!

How could I forget to pay someone who had presented me with this?

Paying for things like food and lodging is handled quite differently here in France as compared to the U.S. When we book a place to stay in the U.S., we either pay in advance via credit card, or our payment is collected as part of our check-in process. In France? Eh. Payment? Yes, yes. Later, they say.

All of this reminds me of my first time in Venice when I was searching for my hostel. Google maps did not yet exist. And if you visited Venice prior to the Internet age, you quickly learned that there existed no good map of Venice, and life was easier if you didn’t actually try to get anywhere in particular.

But I didn’t know that yet. I finally found the road I wanted, and the numbers were going in the right direction. I got to yet another footbridge over yet another canal, and the numbers jumped–completely skipping the one I was looking for. I turned around and climbed back onto the bridge and had a look around. A young woman my age was walking towards me. “Are you lost?” she said, in English. “Yes!” I said. She, too, was a visitor to the city: an American. She too had looked for the same hostel and had no luck. “But my friend and I found a great hotel right behind St. Mark’s Cathedral. You should really check it out.” A hotel was certainly out of my budget, and my hesitation and large red backpack probably gave me away as a frugal-minded twenty-something traveler. But then she told me the price–the equivalent of about fifty US dollars. I thought for a moment and decided that, after two weeks of staying in hostels, the least I could do was have a look.
The young woman gave me remarkably easy directions and I found my way to the Hotel Commercio and Pellegrino. The kind woman at the front desk spoke English. I told her I wanted to inquire about the price of a room. She told me the same price the young woman had. I hesitated once more. “Here,” she said as she slid a key across the counter. “You go and look. If you like it, relax for a while. Later, after you rest, come back down to pay.” Wait. What? I could just go up there without giving her payment, let alone any identifying information? And if I liked it, I could just stay there and pay later? By this point in my trip I had learned that life is a little different in Europe, so I took her advice. I climbed two flights of stairs and opened the door to a dark room just big enough for a twin bed and a desk. The bathroom was even smaller. I flipped on a light, put my pack on the desk, and opened the window. I then pushed open the shutters and the scene took my breath away. The narrow street below. The quiet. The sun warming the day. I laid down on the bed. I was staying.

Here in France, however, there usually is no “front desk” at a gîte. Or if there is, the owner is not sitting there when you arrive, and sometimes isn’t in the building at all. There’s simply a sign that tells you what room is yours and when dinner will be.
Such was the case at the Domaine de Sénos. No desk. Just a sign that indicated I was the only person to occupy Chambre 1, despite the fact that, when I entered, I discovered there were enough beds for five people. Around 5:30 a woman knocked on my door and showed a young man in. She reminded me that dinner was a seven p.m. downstairs, asked if I needed anything else, then left. No mention of who she was, let alone of paying her.

In some gîtes the host would collect payment after dinner, and would say as much at some point prior to or during the meal. But not here. And the next morning the idea of paying was far from my mind. Not even when our hostess joined us for breakfast did it occur to me. In the lobby, as we donned rain gear and packs to head out, our host wished us well. And off I went.

Now I stood on the trail considering my options. I was probably a twenty minute walk from the gîte. But oh how we pilgrims hate to have to go backwards. I certainly would, of course. I had to pay her. But then I remembered the picnic area. That was closer, and maybe she could drive up to it.
I tried to find a dry spot under a tree where I could put my pack down, but no such space existed. Everything I owned was in plastic bags inside, so I finally just put the pack on some grass. I slid the rain cover off just enough to access my guidebook (where I could find her phone number). I pulled my phone out of my inner jacket pocket and dialed.

She answered after a few rings. “This is Rebecca,” I said, in French. “J’ai reste la hier soir et j’ai oublié de payer! Je ne suis pas très loin –” I explained that I wasn’t very far from the gîte but she cut me off. “No, no, no,” she said in a tone that clearly indicated that was a silly idea. “You go to Conques today, right?” She said she had a friend with a shop there. She gave me directions and told me to give him the money. “Tell him it’s for Isabella and Benoît. He will know.”
I arrived to Conques and paying was again the last thing on my mind. I was too busy stopping every three steps to stare in awe at the medieval town that looked like it hadn’t changed in a thousand years. (Turns out it hasn’t much, really.)

My Belgian walking companion, Martine, on our entry into Conques.

I also happened to walk in on the day of a music festival. A Capella singing groups. A harpist. Guitar-playing singers. 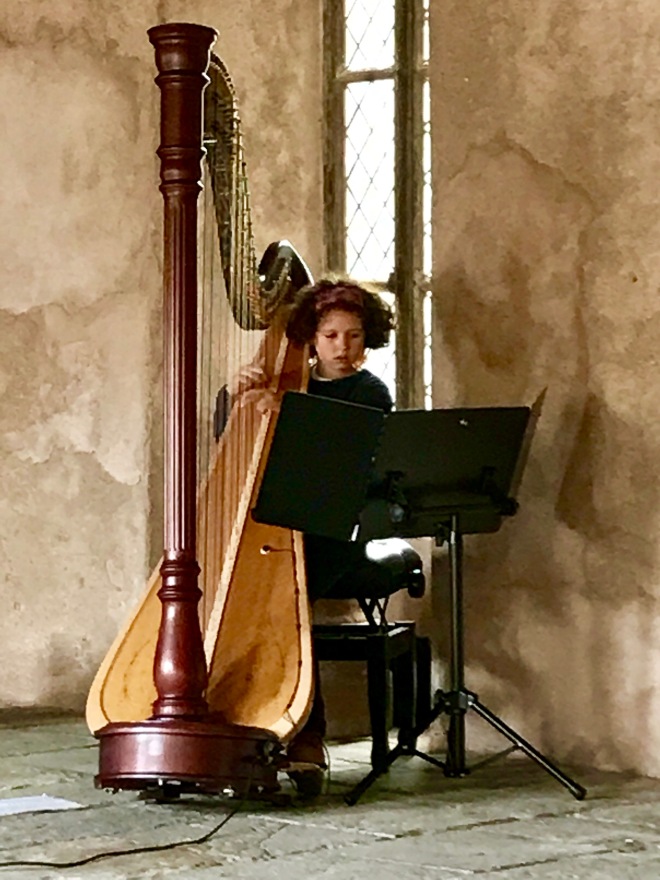 The harpist was a child of not more than 12, and she was incredible!

Once in a while I remembered I had to find the place where I could leave the money, but then I’d run into a friend, or hear music and walk off to find where it was coming from.

Luckily I had decided to spend two nights in Conques. I didn’t really need a rest day. In fourteen days I’d walked what most people walk in ten. But if there’s one thing to know about the Camino, it’s that there are no rules. So if a girl wants to not walk one day, so be it. And if a girl keeps forgetting to search out a place to pay for her Friday night’s rest, well then it’s a good thing she’s got two days to do it.
Isabella had told me to find a shop next to the post office that sells knives and jewelry, and leave the money there. Well, as I wandered the small town I doubted my memory. Did she said “la poste” (post office) or “carte postale” (postcards)? After two different shop owners — both of whom sold knives and jewelry, both of whose shops were next to stores that sold postcards– denied knowing Isabella and Benoît, the second one took pity on me and called Isabella. She listened to Isabella’s directions, then explained to me that I did indeed need to head to the post office. In case you’re ever in Conques, note that in this town of just 300, there are three different shops that sell knives and jewelry. And if you happened to forget to pay Isabella and Benoît, the one you want is indeed next to the post office.

3 thoughts on “Pay me later. Much later.”