Dad has made it clear that he prefers his children never live more than a days drive from Hyde Park, NY. Three of his children live within twenty miles. The fourth?  One hundred miles. And then there’s me. Asheville, a twelve hour drive door-to-door, just barely made the cut.

Mom will follow Dad’s proclamation with, “It’s your life. You can live wherever you want.” Dad glares at her. “We just won’t see you as much,” she says.

When I told my parents that Michael and I were going to spend three months in France last summer Dad said, “But you’re coming back, right?”

“Yes, but only because we can’t legally be there longer than that,” I said.

Michael and I considered Europe a test run. Could we live together? Abroad? For a year? I thought we could. He wasn’t so sure. “The only thing that’s stopping us from doing this right now is your family,” he said to me.

He was right. No matter where I’ve lived–Boston, Bethesda, Asheville–it’s rare for me to go three months without seeing at least my parents.

When I lived in Boston, I wished sometimes that I lived close enough to drive home for a sibling’s birthday dinner or impromptu barbecue. After six years, I moved back to my hometown, and a few years later realized that yes, I was missing some things living a few hours away, but it wasn’t so much that I had to live there. So again I left. And again I have returned. And again, I’m ready to leave.

My timing, in my opinion, has been excellent. I was here to help my youngest sister move from her condo to her first house. And to care for her dog for five weeks while she got settled in to her new home and her new business. I was there when Liz needed “listeners” for my niece’s elementary school science fair. (FYI: They don’t have “judges” anymore. Just “listeners.”) I was there when Liz’s babysitter canceled and when Grandma needed a ride to the hairdresser.

But soon I filled my days with work–so much that I didn’t have the time to give anymore. Nor time for myself and the things I used to do–like write.

And so it is that, for the first time since I left Asheville, I have an entire weekend to myself.  Michael is in California and I have made my way up to the house in Schroon Lake.

For those of you thinking, “You have solitude–don’t you live alone in the apartment over your parent’s garage?” Ha. I do live there. But solitude is not what one finds living on the Gallo property. But that’s tomorrow’s story.

For today, I’ll ignore the lab reports I have yet to grade, the final exam I have yet to write, the algebra review course I have yet to plan. And I’ll sit in the living room in the house in Schroon Lake, close to the fire, with my laptop open, writing to my heart’s content. 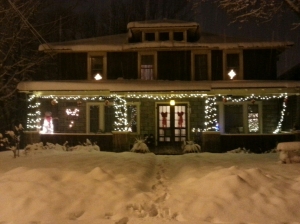 The Schroon Lake house: the lawn is now green again, but I did see snowflakes yesterday.

One thought on “Alone at Last”